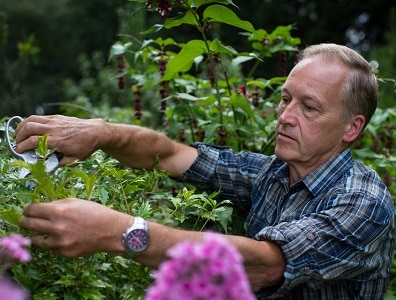 I was diagnosed with hearing loss in my late teens (18-19) when I went for a medical to join the Navy.

I saw ENT practitioners on and off after, but only got serious about fixing it when my hearing just became too frustrating for my wife – about 2007-2008.

When I began treatment, I tested wearing an in-ear hearing aid for a couple of weeks, and then the BAHA device to see which would be the best fit was for me. I decided on the BAHA and Professor Marcus Atlas recommended me for a BAHA Attract clinical trial.

Before receiving the BAHA implant, I would continually say “what”, “pardon” when people were speaking, especially if I could not see their lips moving. I also struggled very much in social situations. My work was taking me to many Gala Dinner-type functions but I could not hear people talking to me from across the table or next to me. I would have to turn my head to my good ear, and ask them to repeat the conversation to me.

Before seeing Professor Atlas, I had also been unable to put my head underwater for most of my adult life, due to having grommets in my right ear for so long. This got to the point that, when a grommet would dislodge, the hole would not heal over. We got to a stage where there was no clear real estate on my ear drum to put new grommets in.

I was nervous about having surgery but I was also expectant of something better on the other side. I knew I would not get 100 per cent of hearing back in that ear, but I knew I’d be able to converse with family and friends in social and work situations more confidently. I was especially expecting to make life and conversation a little easier for my wife.

After switch on, the feeling was brilliant. Being able to hear things from all directions was a new sensation. Before, when someone spoke to me from my right side, I used to hear them only on my left, (which gave me the impression that they were standing on my left side). With the device, I could distinguish what side of me they were standing. Hearing the seatbelt slide over my shoulder was something else that I had never heard before. It was the little, subtle things that made the biggest impact.

The second weekend after switch on, I attended a conference interstate. During the networking sessions after the day’s conference, I was very much confused. The BAHA had taken me a full circle. I had come from a position of not hearing or understanding conversations due to a hearing impairment, to being in the same situation of not being able to hear or understand conversations – but due being able to hear so much background noise. I would be in a conversation, standing up with people in front of me but I also could clearly hear people talking on the table behind me to my right. It was difficult to concentrate on the conversation I was involved in and quite overwhelming. This is something that your brain gets trained to deal with; how to filter out certain things so as to concentrate on the conversation you are involved in.

My audiologist Azadeh has helped me in my journey by being very knowledgeable in her field. She has been able to answer all of my questions with ease – everything from health insurance questions before surgery, to helping me understand why the scenario previously mentioned happens, and how to deal with it. The staff on both sides of the Lions Hearing Clinic and the Ear Science Clinic were extremely helpful in my journey.

Along with hearing better, the BAHA also allowed me to be able to put my head underwater without a plug or swimming cap. I do not have to tilt my head to one side to wash my hair so the water will run over my ear not into it. I am also able to be involved in more conversations; I do not feel like an outcast or look to be aloof when in conversation – whereas previously, I could not hear so I just would not join in.

The advice I would give to someone considering a BAHA implant is to do your research and speak to other recipients. There is a mentor program in place to assist people with their decisions by speaking to previous recipients. If the good outcomes outweigh the bad, do not hesitate, in my opinion; it is well worth the journey.