Danny is still cheering for Ear Science a decade later 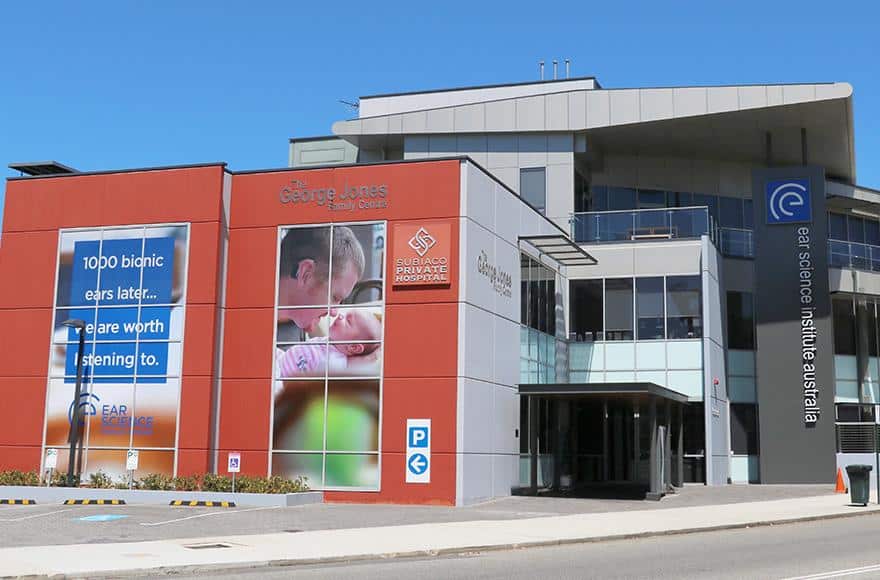 More than ten years after receiving surgery that saved his hearing, WA’s first simultaneous bilateral cochlear implant recipient is still cheering for Ear Science. A photo of him and his daughter is now displayed in an almost 10m tall building wrap on our Subiaco office.
When he was 8 years old, Danny Clarke lost partial hearing in his right ear from a fall. His hearing loss continued into adulthood, when at 24, he suddenly lost all of his hearing in his right ear overnight. He then lost the rest of his hearing after being attacked by a total stranger in Fremantle after a night out.
Four months of appointments later, Danny came face-to-face with Professor Marcus Atlas, who offered a solution to treat Danny’s hearing loss.
“I only had four months of silence, but during that period, I was scared, lonely and frustrated at not being able to hear,” Danny said.
Professor Atlas said a bilateral cochlear implantation surgery could be done to restore most of Danny’s hearing, but it would be delicate – and, in a WA first, both implants would need to be fitted at the same time.
“I am lucky to live at a time where this amazing technology exists and that allows you to reconnect to the world of sound.”
The operation was a resounding success, and two years after his operation, Danny was back at work. Because of his cochlear implants, Danny could continue working in a helicopter, rescuing people from road accidents, off stricken ships, or searching for missing persons as an Aircrewman for the Emergency Medical Service/Search and Rescue.
Be sure to check out the new design next time you’re driving through Subiaco!