Don’t put off getting a hearing test 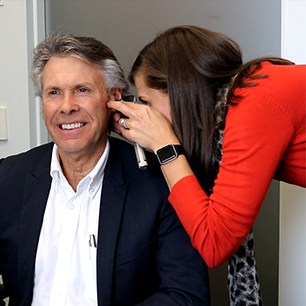 One of our five senses, hearing allows us to interact with the world and others, but if our hearing weakens, it can start to impact on our relationships with loved ones and work life.

Hearing loss is more common than you might think, with one in six Australians affected according to the Australian Bureau of Statistics.

From enjoying home life with your family to your performance at work, hearing loss can impact our day-to-day lives in many ways, and yet on average people put off getting checked for seven years.

One of them was Asthma Foundation WA Chief Operating Officer Ian Craig who, despite the warning signs and people around him telling him to have his hearing checked, continued to put it off.

“I was withdrawing from group conversations, struggling in meetings and driving my wife crazy by asking her to repeat herself,” MrCraig said.

After finally undergoing a hearing test, which resulted in him buying hearing aids through the Lions Hearing Clinic, Mr Craig realised how much his hearing loss had been impacting on his life and how easy it was to fix.

“The moment my audiologist plugged my new hearing aids into my ears, I couldn’t stop smiling,” he said.

Walking out of the clinic, Mr Craig heard the birds again for the first time in years and other frequencies that had been lost, but what struck him most was how drained he had been at the end of the day before his hearing aids.

“You get exhausted and you don’t realise it,” he said.

“My audiologist at Lions Hearing Clinic pointed out to me that what happens is you get behind in conversations and your brain has to try and catch up and fill in the gaps you’re not hearing.

“Your brain is working overtime in every conversation, and by the end of the day you’re too tired to keep up with conversations.”

It was a surprising symptom Mr Craig had been struggling to cope with before his hearing aids, but now he has more energy for the things he loves.

“One of the things I noticed the most when I had my hearing aids is that I got home and still had energy to talk to my wife and family.”

With years of putting off getting hearing aids, Mr Craig recommends others to get their hearing tested earlier and not worry about any preconceived notions they have of what others might think.

“I was so afraid of wearing hearing aids and that everybody would see them and would think I was getting old, but the biggest sign of getting old is people who keep asking people to repeat themselves,” he said.

“I had no idea how much I was missing and the irony is that I feel younger.

“Forget about anything that you might think, just go and have a hearing test and find a not for profit to do it with because you have to be able to trust its advice with such a confusing, large space you’re entering into.”