A gift unlike any other 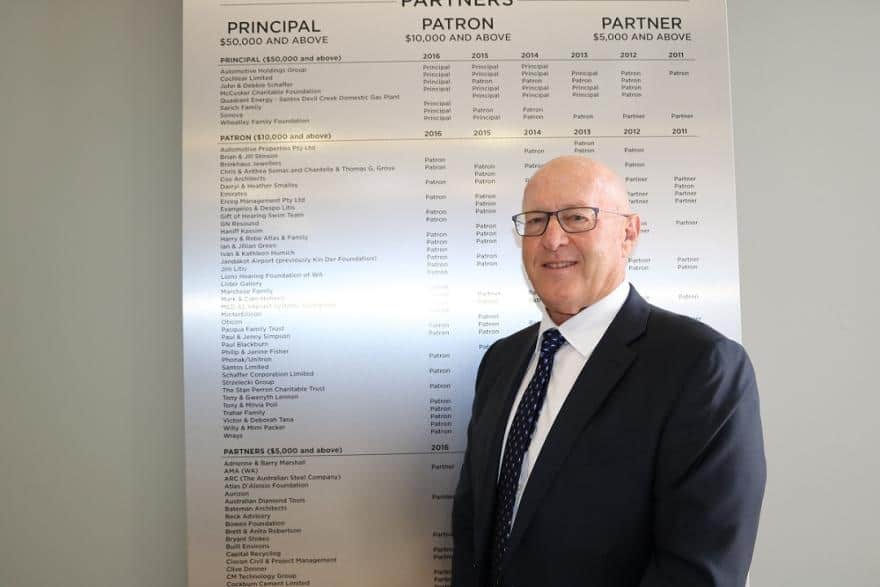 When speaking to the Chairman of Ear Science Institute Australia, it is easy to get swept up in the enthusiasm and passion he has for the organisation. But how deep does it go? After asking a few more questions, we found out.
John Schaffer has been involved with Ear Science since its beginning.
“It was in the early 2000s when I became reacquainted with Marcus Atlas,” he said. “I had heard about him and his work through my close friend Jim Litis. He was talking to us about his vision for an ear and hearing health service hub that was intertwined with science and could be a ‘self-funding model’. Nothing like it had ever been done before in the world and the way he spoke about its potential was infectious”.
After this conversation, Mr Schaffer was in. He had become part of what was to be known as Ear Science Institute Australia. Initially he started out as a donor, helping to fund and fundraise, together with his wife Mrs Debbie Schaffer, for the building that now prominently stands at 1 Salvado Road in Subiaco.
“It was amazing to be part of this initiative and to have the support of the Western Australian community. I can admit that I was hooked. And I have been part of Ear Science ever since”, Mr Schaffer said.
As a not for profit, all the funds created through the institute’s activities are reinvested back into it and, in particular, into science. However, research can be a costly endeavour, especially if you want to see results and within a decent time frame. To help fund the research projects at Ear Science, the institute has a charitable arm called the Gift of Hearing Appeal and Mr Schaffer is proud to champion this at every opportunity.
“The Gift of Hearing Appeal is close to my heart,” he said. “I’ve witnessed the moment we turned on a child’s cochlear implant for the first time and I watched her eyes light up as she heard her mother’s voice. Being able to see the impact first-hand is something that stays with you and encourages you to want to do more.
“It is truly inspirational the things modern science are able to achieve now, but imagine what the future holds. And it is that future we want to influence.
“Through research we know we can impact more lives and through collaboration, such as at the new Sarich Institute, we can go further and get there faster. It is through the support of our Gift of Hearing Appeal donors that we are able to achieve such things and impact so many lives.”
Ear Science’s Gift of Hearing Appeal has the support of many of Perth’s most philanthropic families including Vern and Jo Wheatley, the Sarich Family, Malcolm and Tonya McCusker and their foundation, George Jones and businesses such as AHG, Cochlear, Sonova and Med-El. Mr Schaffer is a large supporter of the Gift of Hearing Appeal and the business he runs, Schaffer Corporation, is also a proud supporter.
“I believe it is important for people to know I personally believe in our institute and its potential to change the world for those with hearing loss,” Mr Schaffer said.
“As chairman I know how the funds are distributed and that 100 per cent of donations will go directly to our 2017 Gift of Hearing Appeal, without anything coming off the top for administration or similar.
“I am proud to join our fellow donors and I will continue to do so, because I know it is going to the right place and it will make a difference.”
The Gift of Hearing Appeal will be holding its annual charity dinner next month, with tickets already nearly sold out. With the last two dinners surpassing the $1 million mark through the generosity of Perth’s philanthropic community, it is touted as being the next wave of critical funding for ear health research.