Another life changed as Denis receives the Gift of Hearing 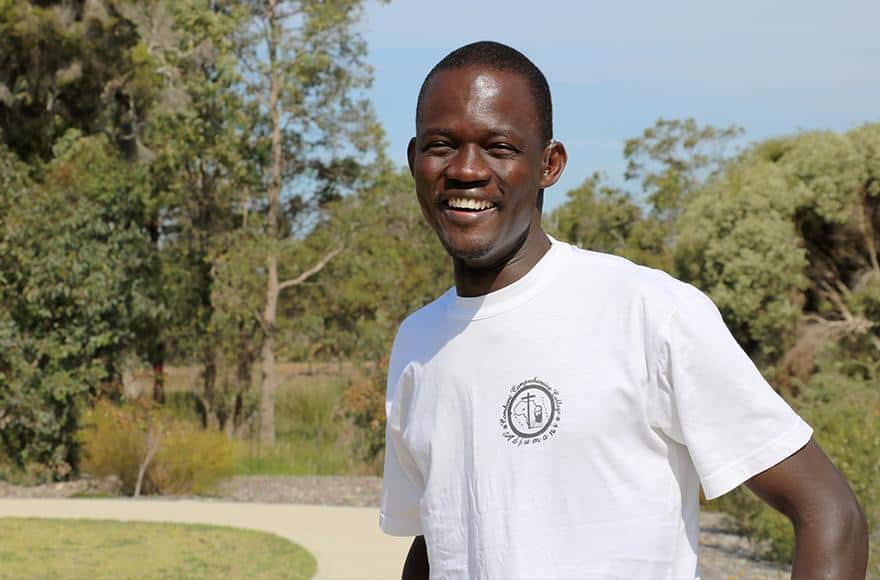 At five years old, Denis Santino was playing with his cousins in South Sudan, laughing at jokes and learning his letters, numbers and sounds. But, soon after, his hearing would dramatically decline due to unknown reasons at the time – and, as a result, so would his confidence, his learning and how he saw his own future.
“I was telling mama, I was actually struggling. I could not tell exactly what was happening. I thought that’s the way it was,” Denis said.
As he went through school, Denis had a classmate sitting next to him, repeating what the teacher said. This made learning extremely difficult, he always felt one step behind the others and would eventually leave school much earlier than he wanted.
At eighteen years old, war sadly drove his family from their home in South Sudan. Denis and his oldest sister moved to Australia where Denis’ life would change immensely.
In Australia, Denis received his first ever basic hearing aids. Denis’ hearing aids lasted him for years as he learned English, began working in a factory and set his sights on going back to school. Denis wanted to study a course where he could grow and work with people.
“The thing that I really like – I love – is working with people. It is the best job ever. But my first thought is whether this person can hear me or understand me.”
Over time, his hearing aids aged and eventually stopped working, leaving him virtually deaf. Not being able to afford new hearing aids instantly became a big problem for Denis – even as he worked well into the night across two jobs to support his new family.
Denis’s plight was noticed when he came into a Lions Hearing Clinic for an appointment. The team at our Joondalup clinic immediately recognised the need was significant for Denis and his family and nominated him to receive a pair of the best available hearing aids through the Gift of Hearing Appeal.
When advised by the team that Denis had been nominated and accepted and would be receiving a pair of Phonak hearing aids, he was overwhelmed with emotion.
“I was so happy! I never thought someone would give me that for free. All I was thinking was I had to spend some money to buy them, but I didn’t have enough. And, when I realised, I was like – I don’t know what to say. I was so happy! I realised things were changing in my life,” Denis said.

The impact of Denis’s new hearing upon his life was immediate. He’s seeking leadership roles at work, talk to his nieces and nephews on the phone – and now, set his sights back on study.
“If I had hearing aids like this before, I would not have dropped out of school, because I could actually listen to the words that the teacher is saying.”
“If I get a chance, I’ll be going back to study. Now I have these hearing aids, it makes life so much better. It gives me so much more confidence. Thank you!”
To the Gift of Hearing donors – and especially the kind donor of these hearing aids from our Gift of Hearing Appeal 2018 charity dinner, Ms Ilana Atlas – Denis has the greatest appreciation for your generosity.
“They have done a good job with helping people like me. I’ve already been helped and I know what I’ve gone through… but there’s a lot of people out there who need their help, too. Not only me.”
You can help a West Australian just like Denis by donating to the Gift of Hearing Appeal today.
Yes! I’ll donate to the Gift of Hearing Appeal!