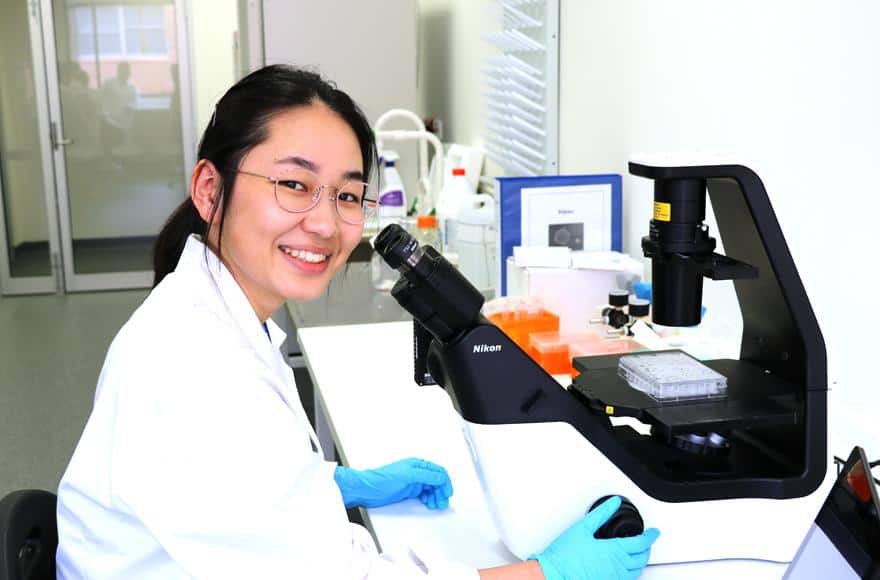 We recently introduced you to Dr Abbie Francis, a researcher who heard Associate Professor Rodney Dilley speak at several University events, then worked incredibly hard to join our team.
Now, we’re introducing you to Minami Uemoto, a student who joined Ear Science’s research team in the same way – almost at the same time!
Minami met Dr Elaine Wong and Huan Ting Ong at an honours event at the University of Western Australia and the trio got to talking.
“The intricacies of the inner ear really captivated me,” Minami recalled.
“We hadn’t covered those topics in my previous studies, as well as the enormous impact hearing has on the general population.”
Today, Minami works in Dr Elaine Wong’s dedicated inner ear team on “the Six1 project”. That is, deciphering the role of a gene called Six1 in human progressive hearing loss.
Once you’ve damaged your hair cells (cells in the inner ear which have tiny hairs), they cannot be restored, which causes permanent hearing loss. Currently, no drugs are able to regenerate the damaged hair cells.
Minami’s role is to examine a gene mutation found to cause Branchio-oto-renal syndrome, which has effects on development of the inner ear hair cells. Minami hopes that this research can identify Six1 as a drug target for hair cell regeneration to restore hearing.
When Minami isn’t researching genetic mutations in the lab for her Honours degree in Biomedical Sciences, she’s playing the flute for the WA Wind Symphony, or doing Kendo with the Sakura Kendo Club.
Learn more about Ear Science’s international research team and its work with talented students.